The must-see sight in Hayakawa town

The six districts in Hayakawa town 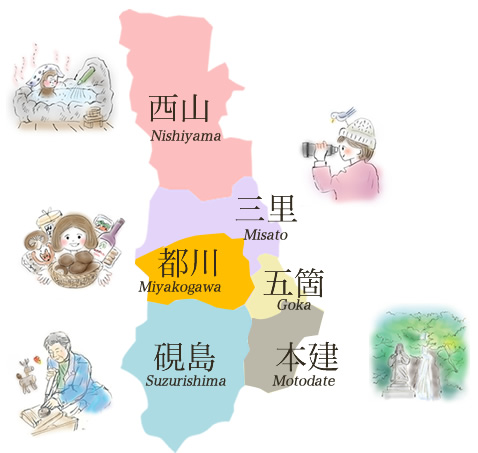 Motodate district is a peaceful village which is located in quiet mountains and used to prosper as a post-town for connecting the “Mt.Minobu” that is the head temple of Nichiren sect and the “Mt. Shichimen” that is the Shugen Reizan (Shugen means that Japanese mountain asceticism-shamanism incorporating Shinto and Buddhist concepts, and Reizan means the holy mountains). This district is designated as Preservation District for Groups of Traditional Buildings. The view of the district still has the beautiful Edo period atmosphere.

In Goka district, You can see the old Japan’s rural landscape since there are still cultural resources related to agriculture such as the fields, the big unique roofs of private houses called Kabuto-zukuri (is one of the roof style in old Japan. It was named because the roof looks like Japanese samurai helmet, Kabuto), masonry, and irrigation canal and so on.

Suzurishima district is surrounded by 2,000 m-class mountains, so that you can see the landscape of seasonal mountains up close. The tea plantation on slopes is spread out in this area, and the tea brand, “Amehata-cha” in this area, is valuable. This district is also famous as ink stone (called “Amehata Suzuri”) producing area, and the ink stone has been always purchased and used by artists.

Miyakogawa district has been loved by young people and people who have children because there is a lot of tourists’ attractions such as hot springs, auto-camping sites, galleres, cafés, restaurants in wild game meat dishes. In ground of Hachiman Hiyoshi Shrine, there are two giant cedar trees called “a couple (a husband and a wife) cedar tree”, which is 800 years old with the thickness is 7 m and the height is 41m.

Misato district had been prospered in forestry, electric power development, and mine development until the middle of Showa period, and even now, traces of inns and restaurants of the period remains. It is said that the “Mogura” region is called “Japan’s Machu Picchu”, and the traditional cultures and spirits of mutual aid like Shishimai (performers mimic a lion’s movements in a lion costume to bring good luck and fortune) and Amagoi (praying for rain) are still remained strongly.

Nishiyama district, located the northernmost district in Hayakawa town, which was prospered in therapeutic bath has over 1,300 years historical background. Currently, there are five hot springs flowing directly from the source, so that the district is always crowded with many tourists and visitors. The northernmost village, Narada, there is the Imperial Palace ruins in where the Emperor Nara (the 46th Emperor Koken) had been living for eight years and it has The Seven Wonders Legend. The culture of slash-and-burn agriculture and the unique ethnic customs are still remained a lot and these are the ones of the most interesting parts in Nishiyama district.