Doing our best to work together as a couple, a husband focusing on making sushi deep in the mountains and a wife who is such a reliable person. 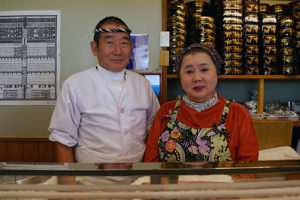 Our favorite place in Hayakawa: Narada

Kusashio Hot Spring is a modest facility of drop-by bath without an overnight stay run by the town. The spring quality is a weak salt spring included sodium bicarbonate and it has efficacy for rheumatic diseases, scald and skin disease. At a part of hot spring facility, there is a sushi restaurant called “Takezushi” and this is an only sushi restaurant in Hayakawa town.

A geisha (a woman who entertains customers) and a sushi chef

Kusashio Hot Spring is run by a couple, Mr. Takeichi Sato and Mrs. Kazue Sato. Takeichi was born in a house running a restaurant in Aomori prefecture located in norther part of Japan. He had determined to make a living as a sushi chef and went to Tokyo to be apprenticed to a sushi chef. He has been focusing on working as a sushi chef since he was 15. He ended up having his own sushi restaurant in Ningyo-cho, Nihonbashi, where is the place of authentic Edo-style sushi. Around that time, he met Kazue who was a geisha and they eventually got married. Mr. and Ms. Sato closed the restaurant business in Nihonbashi and migrated to Hayakawa. Since then, they have been running Kusashio Hot Spring.

Trigger for emigration – turning point in our life

The trigger in the first place for emigrating to Hayakawa was to get started doing a volunteer work “ to serve good sushi for people live in mountains”. The first year of the volunteering, he made about 1,200 pieces of sushi a day. In Hayakawa, there are six districts and it was supposed to take for six years to visit each districts. However, he was developing cancer of stage 4 when he had just started volunteering. He is “a person who he wants to be a sushi chef again even in another life”. He asked his doctor to put off the date of surgery and to keep trying to make sushi for doing the volunteer work. His surgery taking for 14 hours went well but he was not fully back to normal right after the surgery. But because he did not give up the volunteer work, he continued to doing the work for several years. Then he realized that he was getting better and better. He told his wife, Kazue “why don’t we move to Hayakawa? My throat is getting better, I think.” She was upset and asked him “what are you going to do with Takezushi (in Nihonbashi in Tokyo)?” but she thought his recovery was because of “the extremely fresh air of Hayakawa town” and understood his feelings, so they decided to move to Hayakawa town. Eight years ago, when they just moved in, they used to laugh at the unfamiliar sight and to say “we are like moving into a zoo!” because they used to see a lot that wild monkeys got along well pulled out Japanese radishes and broke watermelons in the field and ate them together. Now, they feel at ease on their way home when entering the town after crossing the Hayakawa Bridge. They enjoy fresh green and autumn leaves in each season and are so relieved because that feelings is like promising that they can live in peace and quiet in the future. Kazue truly feels that they made a right choice to move into this town. The Noren which is a shop-curtain is the one they brought from their restaurant in Nihonbashi. They still serve fresh tuna sent directly from Tsukiji Fish Market. Kusashio Hot Spring in the mountain appears a modest facility but the passion of Kusashio Hot Spring they have is very profound.

Our hospitality is for giving back to you

They have been feeling that they want return the favor, grateful for their usual life, to local people. To show their gratitude, they have been trying to make Kusashio Hot Spring more attractive place. While making use of their experiences, being a sushi chef and a geisha, they are making it a habit to give meticulous attention and hospitality to their customers. They provide a hot citron bath in winter, serve Shiso (Japanese basil) juice. Also, they serve Chanko hot pot which they were taught how to cook by sumo wrestlers. Setting free Japanese snacks are for making children happy, and providing free seasonal vegetables are for visitors of camp sites located near their facility. During the Christmas season, you can see the Christmas decorations in the facility. The modest facility are decorated with ornaments in each season and make customers enjoy staying there. Additionally, they invite a chief priest as a guest speaker from Yakushiji temple that is deeply associated with Narada districts, and hold a lecture as one of the temple’s annual events to attract customers. If you are interested in using Kusashio Hot Spring for having a Buddhist memorial service or a banquet, please feel free to contact Kazue. Kusashio Hot Spring is now preparing for applying for a license to be able to let stay at as a bed and breakfast. This is a good news especially for bike riders stuck in a sudden rain and also for visitors who want to relax after having dinners and parties. They will be happy to be able to stay longer. As a couple, their challenge for Kusashio Hot Spring will go on. 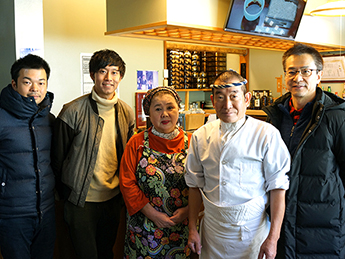