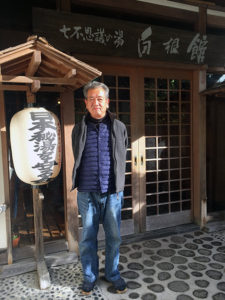 My favorite place in Hayakawa: Narada

This is the Ryokan (Inn) with hot spring that my parents started managing.

“Shiranekan” run by Mr. Mamoru Fukasawa is a Ryokan (Inn) that started managing by his parents at the beginning in 1962. It is located in Narada area where is in the northernmost of Hayakawa town. In Narada, water freezes in winter season, so people used to go to a pond with warm water (a pond for washing) to wash clothes. However, due to the dam construction in 1956, the pond was sunk in the lake. But then, for revitalizing the community, the people lived in Narada tried to dig a hot spring in the place where the pond for washing had been. Although it was not easy process to dig a hot spring, the water was gashed out because an earthquake occurred by chance. So, Shiranekan was established there after founding the hot spring.

Down to the present day of Shiranekan

Mr. Fukasawa who was born and raised in Narada had experienced to work in Tokyo. But he came back to the country side, Hayakawa town, because he didn’t really like the hustle and bustle of the city and also he took an opportunity that his first baby boy was born. He got started working for Shinranekan with his parents, but then, it was a seasonal job since summer climbers were main customers and off-season of work was just too long. Therefore, he stared to work in mountains and to do a shiitake mushroom cultivation and so forth. However, he felt that he was at the limit of hotel management with those side businesses and started to think and research how to survive only by running the hotel business.

Our spring quality is the best in Japan! We are sorry but groups of customers cannot make reservations…

そIn order to survive only by running the hotel business, they decided “to make the most of their hot spring”. Mr. Fukasawa had a lot of confidence that the spring quality is better than any other places in Japan, so they gave up on accepting the reservations of large groups of customers and of customers for banquet, but aimed to make an inn which only accepts visitors who really enjoy the hot spring. At the beginning, they faced some difficult issues, but gradually their customers got started to understand the policy of Shiranekan and now the management style is getting exactly what he was thinking about back then.

Keep making an effort for Shiranekan for our customers who want to come back again!

“If they visited us only once, we would lost. If twice, that would be the even. And if three times, we would won!” – This has been written in the website of Shiranekan. As it shows you, Mr. Fukasawa has been sticking to his ideal business style which is to run a hot spring ryokan where the customers really want to come back again. That’s why he have been deeply caring customers and giving the best hospitality in “unique to” Narada.

A man loves mountains and Narada

Mr. Fukasawa, who was raised in the mountain area, loves to feel the nature like plants and animals in mountains and the landscape with his throughout his body. He is full of love for Narada where there are beautiful mountains he loves. There are still traditional cultures and unique customs in Narada, according to him. So, he told us that he wants to keep learning them and introduce them to the world from now.

We tried to experience the Nrada Hot Spring and felt hot water on our skins!

After interviewing, we bathed in the hot springs. The hot water was surprisingly thick. We felt that it was the best and had never experienced such hot spring before! The bath tub was divided for hot water and lukewarm water, and also the men and women’s bath were switched depending on time. To let customers fully enjoy their hot spring, it seemed that they had put a lot of thought into the hot spring business to keep customers from being bored. Please try to visit Shiranekan and enjoy spending such a relaxing time, everyone! 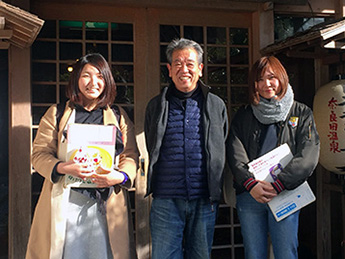 Go back to Hospitality deep in the mountains »