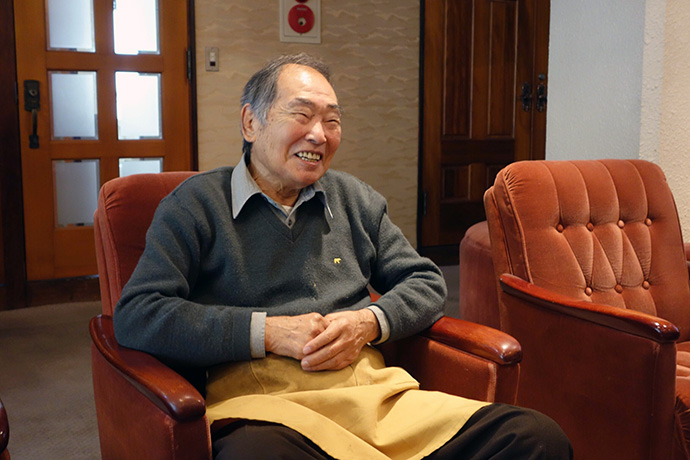 A man of being “clumsy” and “goofy” at Houraikan

Mr. Amano is 82 years old but seems like working very energetically. And now he is running Houraikan by himself. When entering Houraikan, Mr. Amano will welcome you with such an innocent smile just like a little boy. Houraikan is always full of guests because of his approachable personality (but he calls himself “clumsy” and “goofy”), and the characteristics of hot spring. Now, let’s see what kind of ryokan(inn) Houraikan is.

Houraikan got start to be managed by Mr. Amano’s father in the first place. Mr. Amano was not supposed to take over his father’s job since he was the second child. He had actually started working at a trade company in Tokyo after graduating a university. However, Yamanashi prefecture was hit by a big typhoon which was a historical disaster when he was 24, and the Hayakawa River overflowed. Then, his elder brother who was supposed to take over his father’s job got scared and left Hayakawa town. So, his farther handed over the baton of his business to Mr. Amano.

Mr. Amano has been focusing on “his attitude to keep on learning” since his job got started busy at work. In order to obtain the travel knowledges to learn how to manage the ryokan (inn), he has traveled a lot. When overseas travel became a boom in the world, he took his all employees to overseas research trip every year. Through this opportunities, he expected that his employees would be able to get some ideas and senses for having a good conversation with customers. Mr. Amano’s wife actually paid everything for the employees for this trip with all their gratitude. Because of this, they could gain the trust and make their work go more smoothly. In addition, what he learned at his previous work place that was a trade company, was also useful to make use of his skills for Houraikan’s work. He leaned that it is important to try “to take an initiative in doing whatever others will not, in order to get through difficult times in business.”

Hot-spring cure was a great help for people at that time when it was difficult to see a doctor. The visitors for hot-spring cure wanted to stay longer as long as possible even though they were forced to cook by themselves there. The people knew that the hot spring had therapeutic potential, which is blessings of nature. For Mr. Amano, those guests were ones who really knew the “genuine” natural benefit. So, he wanted any visitors who look for “genuine” hot spring to use this place, therefore he has been running Houraikan even after he became an self-employed and he started to work alone.

Another attractive aspect is that you can enjoy the sinter in the hot spring when the seasons are changing. You can see big sinters in the spring hot water when the season changes from autumn to winter, and from winter to spring. Mr. Amano is also looking forward to seeing the big sinters at this timing. The color of sinters which you can see at Houraikan is orange (gold) and you can see this color of sinters at only this hot spring, Houraikan, in Japan. Houraikan is such a precious hot spring for that.

It seems that Mr. Amano really enjoys talking to customers at Houraikan. He talks to them very friendly and has a lively conversation while putting himself in their shoes. This is he who “loves” and “is proud of ” Houraikan and this is his hospitality for the visitors. He really cares for those people who really love the “genuine” hot spring at Houraikan from his bottom of heart. 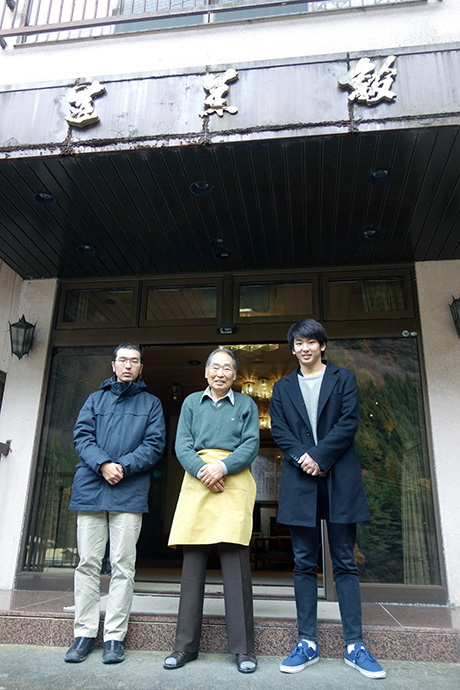