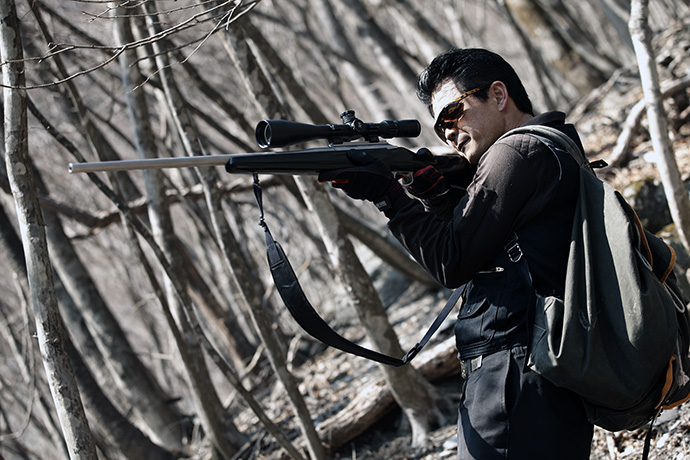 The way of hunting deer and providing the deer meat at Hayakawa Gibier – YAMATO is a quite unique way. The providing deer meat is all what Mr. Hideki Mochizuki, the shop owner, hunted by himself.
The method of hunting is that he aims and shoots the head of the deer in one shot. On top of that, he aims the deer only when it is eating grasses, is taking a rest, and is not feeling any stress. Right after the deer is shot and killed, from the mountain, he takes it to the meat processing facility where is right next to his shop, and finishes the meat process up to vacuum pack within an hour.
The trapped deer obviously feels some stress. If the deer is taken to the meat processing facility from the mountain, the body temperature during taking apart will be 3℃ different from the one which is hunted by Mr. Mochizuki. The difference directly influences the quality of the deer meat. “You can taste the difference right away when you test taste. I cannot tell if everybody is going to realize the difference, but at least, I don’t want to serve such “inferior meat” as our product.” said Mr.Mochizuki who eats his deer meat almost every day.
He cares very much about the quality of his deer meat. His values on the meat just cannot categorized as a whole like “game cuisine” or “special products in Yamanashi”. He also gave me a comprehensible explanation about the characteristics of deer meat that had been running around on steep mountains, while adding the state of mountains.

He was born and raised in Kyogashima district in Hayakawa, deep in the mountains. He had an interest in nature and hunting when he was a child because his father was a hunter. He likes going into mountains and used to trap to catch birds at the beginning. When he became an adult, he used to hunt wild boars with his farther together. However, they realized that the number of wild boars had been decreasing for some time, and at the same time, the number of deer had been increasing. The reason was the food shortage of wild boars. – Both deer and wild boars prefer to eat acorns during the winter time and deer’s stomach is bigger than wild boars’.

Mr. Mochizuki said, “The purpose of starting to run this business was to get rid of deer on mountains. But if I focus on doing that, I might hunt over 400 deer in a year! If I go at this pace, all the deer on the mountains might be gone. So, I have not been trying to hunt them a lot recently. I hunt them only for my customers who “want to buy the game meat”. Now I realize that I should consider my business separately; getting rid of deer and running my own business”.
The number of hunting, 400 deer in a year, is by far the best among the hunters. It may not be exaggeration to say that he controls the mountain ecosystem because he literally express this situation like “I have deer in the mountains (as my pets)”.
He cares not only for the taste of game meat, but also for food hygiene management for his facility requiring inspections. So, he works with health centers, research institutions and universities for that. There are no other places where carry out inspections so often like his facility. Now, what he has been really putting his mind into is to add more values and build on overall images of Hayakata town. He believes that it is important to collaborate with various kinds of efforts and to support each other within Hayakawa town. It may not always be the case that this idea will have a beneficial influence for YAMATO’s earning and expenses. However, he thinks that changing the way of giving a look toward Hayakawa town is essential to achieve significant his own value.

I wondered how he normally called himself. For me, it seemed that he had already surpassed “a hunter”.
“I have been calling myself as “a hunter” for 15 or 16 years…but it doesn’t feel right. Maybe, I am “a hobbyist” because I’ve been doing only what I like to do…Our (young) staff members enjoy hunting and I go with them. The other day, I let one of my staff members hunt an animal in the mountains. Now I really enjoy seeing what they are learning. This is the most fun part for my life right now. 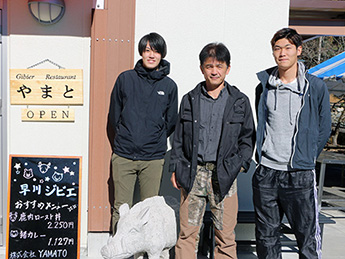