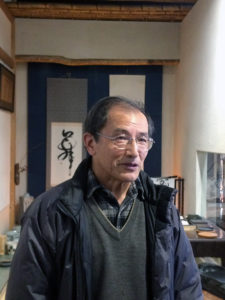 There are only a few producing districts of ink stones in Japan and “Amehata Suzuri”, Amehata village in Hayakawa town is the one of the districts. The gemstones come out of mine at the upstream of Amehata River in Hayakawa are processed, and they become beautiful ink stones. Those products are sold at Kensho-An, and you can also meet a man, Mr. Hajime Amano as a director of Kensho-An, who loves Amehata Ink Stones there.

After he had retired his previous workplace, Mr. Amano decided to work for the facility with his ambition which is that “he wants to leave Amehata Ink Stones existed in this area for the following generations”. He works with an only craftsman of Amehata Ink Stones, Mr. Gyokusen Mochizuki, and they have been telling tourists and calligraphers how wonderful the Amehata Ink Stones are.

Mr. Amano said, “Unless the gemstone was gone, the potentials of Amehata Ink Stones would be still there because current craftsmen still have great skills taken over by ancestors and the products have been developed while getting the most out of the quality of raw materials.” It doesn’t matter if people will not purchase the products right away, but Mr. Amano goes to the nearest train station to pick up whoever wants to visit his gallery to enjoy seeing the products. For the people who are not interested in Amehata Ink Stones, he provides another space where they can still enjoy seeing the other goods such as accessories and beauty products developed and made of traditional ink stones in Hayakawa called “Amehatashinseki”. They are actually on sale at the gallery. He has been looking for successors to continue the tradition and even keep asking people who retired from work – “Why don’t you just come and join me to make Ink Stones just for fun?” He has such a deep feeling for Amehata where he was raised and Amehata Ink Stones themselves. He continuously tells us that he is eager to create the Amehata Ink Stones as an emotional support for the local people and to pass it over as one of our cultures in this district.

He gets excited when he starts seeing that spring is coming from wintry cold landscape. When coming down from Amehata district to the town hall, he can see the changes of landscape: white color of snow on the mountains, brown color of winter trees, and light green color of Sprouting. He told us that he always feels that “I wish time could stop!” at that moment.

When we asked Mr. Amano to show us the mine, he accepted our request without any hesitations. The place was located deeper in the mountains than we had expected and the road to the place was very steep the mountainous area. Inside of the mine, the rough rock surface was brought a solemn atmosphere so that we could have firsthand knowledge of mysteries of nature in Hayakawa.

We thought we could understand the reason why Mr. Amano called the Amahata Ink Stones a main industry in the local area and the mine supported for the industry “treasures of our community”. These Amehata Ink Stones with full of memories of Mr. Amano and the craftsmen have been made by working and creating for such a long time, we felt.

According to a local myth, the history of Amehata Ink Stones can be traced back to 700 years ago and it was the origin that Saint Nichiro, who was a disciple of Saint Nichiren, let local people make Amehata Ink Stones at the upstream of Amehata River area. After that, the Meiji era was a golden age and over 100 craftsmen were still there. However, the number of craftsmen producing Amehata Ink Stones had decreased due to an aging society come up to the surface during the high-speed growth era, and they had to face difficult situations to protect the tradition. At that time, both “Kensho-An”, a gallery for specializing ink stones and “VILLA Amehata” , an accommodation facility were established in 2000 due to the town policy which was to build a base in each old village while taking an advantage of a business of the National Land Agency at that time.

Producing “Amehata Ink Stones” is a tradition which has been passed down for a long time in Amehata district, and it was certified by Yamanashi prefecture as one of the Traditional Crafts in 1994. There are about six work processes from collecting gemstone in the mine until finishing products. The gemstone called “amehatashinseki” is a leading high quality stone in Japan, and the local people cherish the mine as “a treasure of the local district” because the mine was located in old Suzurishima village before a merger with Hayakawa town, and that area became a property ward. 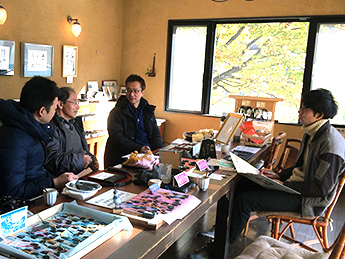