Dedicated her entire life to be as an Okami (landlady) at Tawaraya Ryokan in Hayakawa with a strong will, a flexibility to accept changes, and a warm heart for her own family. 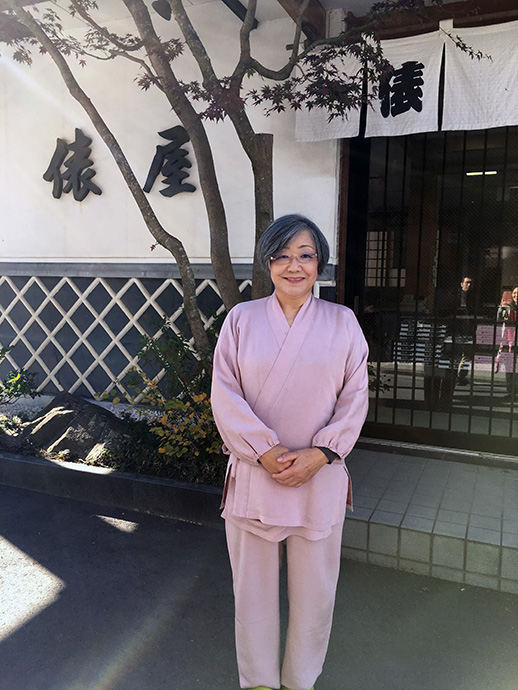 There is a starting point of a trail at a Nichiren sect’s sacred mountain, Mt. Shichimen, in Motodate district, and many followers of Nichiren sect still visit this district. This place is exactly like a mountain village for believers of the Nichiren sect. There is a part of the district called “Sumise”. Tawaraya Ryokan (Inn) is located in Sumise area. This Ryokan is managed not only as hotel business but also as passenger vehicle transportation business by taxi and bus. They accept groups of visitors going to Mt. Shichimen throughout the year. They occasionally accept about 600 followers a day and send them to Mr. Shichimen. Ms. Chiyoko Mochizuki is an Okami (landlady) with a lovely smile who has been running Tawaraya Ryokan.

She is originally from Saitama prefecture and used to work as a teacher in Tokyo. About 40 years ago, she got married to a man who was from Hayakawa town and then moved to Hayakawa with him. When she first visited Hayakawa, the first impression of the town for her was like “What? Here?” She just said that without thinking. She didn’t get used to communicate with people who really cared about the bonds among old neighbors living in the strong territorial bond. But she made up her mind once again – “Coming to Hayakawa was what I had chosen and decided!” After that, she became a mother with two sons and a daughter and now she works with her two sons for Tawaraya Ryokan. It seems that she has a strong will, a flexibility to accept changes, and a warm heart for her own family.

In the first place, Tawaraya Ryokan was a rice dealer. So, they distributed rice and also sold miscellaneous good there. Since 1970, her husband’s parents started the hotel business and established the base of Tawaraya Ryokan. Around that time when the business was started, a lot of followers going to Mr. Shichimen came to Tawaraya Ryokan almost every day.

Those followers go to bed earlier and wake up very early. While it is still dark, they start to climb Mt. Shichimen. At Tawaraya Ryokan, from two in the morning, the whole staff members get start making bento (lunch box) for the followers. Tawaraya Ryokan can always try to meet customer’s request “as much as possible” while flexibly dealing with customer’s schedule even if it is different from their regular business hours. They pour their heart and soul into their cooking with using local ingredients. Okami is very particular about the homemade pickled plums and miso (fermented soybean paste) for Tawaraya Ryokan.

In a big hall used by followers, there is a Nichiren sect’s Mandala hanging on the wall. She always appreciates to ancestors who cared for Mt. Shichimen from Edo period to our grandparents’ generation. She always thanks to them because she believes that they were the ones who made what the current Tawaraya Ryokan is today. Now, another hot spring water has just drawn to Tawaraya Ryokan and she is planning to have a new hot spring facility while leading the project with her own creative ideas after understanding customers’ needs. But at the same time, she has never forgotten to take care for and to keep the things that her ancestors had already built for Tawaraya Ryokan. After opening the new hot spring facility, she has a deep feeling that she wants, not only customers who stays over there but also others who just visit as a day trip, to enjoy the hot spring and relieve the weariness before leaving. We felt her spirits in her thought. She also emphases that “employees are our treasure!” She always appreciates such supportive employees for managing Tawaraya Ryokan.

She has a belief that is “taking responsibility for my words”. She is currently aiming to strengthen their business foundations while trying to do her best for the business of Tawaraya Ryokan until the end even if it gets tough. After that, she hopes that she can spend her life while watching over her grandchildren as they grow into young adults. In the future, she is going to entrust her two sons who are willing to take over the business. She will not leave the ryokan soon but she wants them to decide how they should manage their business by themselves. After her retirement, she wants to support them as a mother.

“For me, Hayakawa town is a place where I am spending my entire life. For my children, this place is their home town. Therefore I want to continue to treasure this place. Thanks to Hayakawa, my life is so brightening to be as a wife, a mother, and an Okami. Hayakawa is a part of me now. This is my life as an Okami at Tawaraya Ryokan. Please look forward to seeing the future steps of our next generation who will take over mine and the new developments of Tawaraya Ryokan! ” 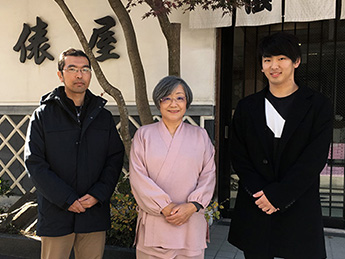